It is common knowledge that the KwaZulu-Natal North coast is experiencing significant drought and it is during times like these that we need to endeavour to conserve our water and protect our land to the best of our ability.We at Emdoneni Lodge would like to encourage everyone to do all that is in their power to save our water and protect both the land and the wildlife affected by the recent droughts and it is so encouraging to hear of all the systems set in place in order to help combat the effects of the drought on the coast. 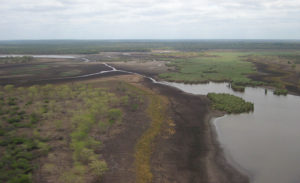 The iSimangaliso (meaning miracle and wander) Wetland Park is a well-known heritage sight here on our South African coastline. The Wetland provides many a wildlife with a place of safety and source of water and food. The Wetland Park is 332 000 hectares in size and houses 3 major lake systems, 8 interlinking ecosystems; 700 year old fishing traditions; most of SA’s remaining swamp forests Africa’s largest estuarine system’ 526 bird species and 25 000 year old coastal dunes – some of which are among the highest in the world which is why it is imperative to us to conserve the land and protect it – as well as any other areas that are being negatively affected –  from the effects of the on-going drought in the area.

There has been extensive coverage and research done into the damage and impact the drought has on people and livestock in the area but it has become evident that there has not been a large amount of research done into the effects of the drought on wild life and wild species that inhabit the area, which as you can see is a massive amount.  With Lake St Lucia Estuary being the largest estuary in Africa, not only does it impact local bio-diversity but it also impacts bio-diversity on a national and global level and is material to the viability of many local and national economic activities and so we would like to share with you the systems and procedures being put in place in order to help protect and conserve the area:

The aim of this tender or process you may ask? The intervention mentioned above will contribute to the hydrological and estuarine restoration of the Lake St Lucia system and wetland by encouraging the link between the Umfolozi River and the lake and making this link a more stable one.

Research has indicated that with some of the land removed and the increased stability in the connection to the Umfolozi, the mouth of the estuary will become more open more often then closed.

Apart from what is being done to assist the situation we feel it is also vital that people in the area understand what should not be done or what not to do:

For more information visit www.isimangaliso.com and download the document “Lake St Lucia: Understanding the problem and finding the solution.” Support is most certainly needed for iSimangaliso’s Rare and Endangered Species fund; to make enquiries about donations to the fund, feel free to email debbie@iSimangaliso.com