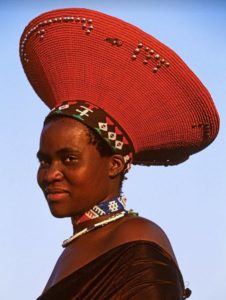 It’s almost wedding season and we love this time of the year! Living in Kwa Zulu Natal makes the Zulu culture extra special to us and we would love to share how the Zulu traditions apply to when it comes to a wedding.

As with most cultures there are different stages in a Zulu wedding. In western society there will traditionally be an engagement, followed by a kitchen tea or hens party, the infamous bulls party, and finally the wedding. A traditional Zulu wedding is quite different, but also has distinctive stages, with the first being the payment of lobola, something that’s the subject of great debate these days. Once lobola has been paid izibizo will follow, where gifts are given to the bride’s family, followed by umbondo where the bride reciprocates by buying groceries for the groom’s family, and finally the actual wedding or umabo.

A Zulu bride covered in a blanket, carrying an assegai

The traditional Zulu wedding always takes place at the family home of the groom. The bride will leave her home early in the morning, covered in a blanket given to her by her mother. The bride’s father leads her to her new family home, and she is advised not to look back, so as not to invite bad luck. The bride’s father will call out the family’s clan names, telling the ancestors that his daughter is officially leaving home to join another family. On arrival at the groom’s house the bride must walk around the house so as to be introduced to her hsuband’s ancestors, before entering the home through the kitchen while nobody is noticing her – the groom’s family will pay a penalty for not being aware of the bride – they should have gone to fetch her. The bride’s family also comes early in the morning, with the wedding ceremony starting at around midday.

A Zulu bride sitting on her grass mat

The groom buys two cows which are slaughtered and eaten on the day of the ceremony. He also buys a goat that is slaughtered after the head of the family has spoken. The father of the groom opens the ceremony by welcoming his new daughter, with the bride’s father also saying some words, as a sign that he approves of the union. After the ceremony there is dancing and food.

While gifts and money are given to the bride’s family prior to the wedding, on the day of the umabo it is the turn of the bride to give the gifts. The exchange of gifts symbolises the forming of a new bond between the two families.

The bride’s family buys grass mats, blankets for the women, beer pots for the men, as well as some pieces of furniture and brooms, which are given out to guests at the wedding by the bridesmaids and sisters of the bride. The bride sits on a grass mat, and refrains from talking or looking at anyone out of respect, while her bridesmaids hand out the gifts. The names of the various people receiving the gifts are called out one by one. The wedding guests will lie on the grass mats, before being covered with a blanket by a family member from the bride’s side. They then sing and dance as a sign of appreciation for the gifts. Older women are called first, followed by the groom’s sisters, and finally the men. The groom is the last person to be called.

After the groom has been called the bride gets up, makes up a mock bed and goes to look for her husband. When she finds him, she will place grass mats on the floor leading to the bed, where the groom will sit down. The bride takes a basin with a towel and soap and washes the groom’s feet. She then pulls back the bed covers for the groom to lie down. As part of the drama the bridesmaids and other young ladies from the bride’s side hit the groom with small sticks, after which the groom runs away.

Umabo is a very important ritual in Zulu culture. Some people believe that a person is not properly married until they’ve carried out the ritual of umabo. For this reason couples who experience difficulties in their relationships, or struggle to have children, will sometimes go through the process of umabo years after they first got together, as a way of appeasing the ancestors – it is only through umabo that the ancestors will recognise the union.