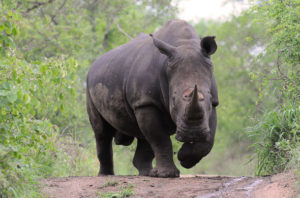 Famed as the wildlife park that saved the White Rhino from extinction, today Hluhluwe-Imfolozi Game Reserve in KwaZulu Natal is home to a large population of Rhino and is a must-see destination while visiting South Africa.

The game reserve that saved the White Rhino – Hluhluwe-Imfolozi

Located on 96 00 hectares of land, Hluhluwe-Imfolozi is approximately 3 hours from Durban and is considered one of the highlights of any visit to South Africa’s KwaZulu Natal province. Home to over 96 species of mammals and more than 330 species of birds, visitors to Hluhluwe-Imfolozi can look forward to spotting at least one or all of the Big Five while exploring the reserve.

The nature park is home to the second largest population of White Rhinos in the world, after the Kruger National Park and also has a large population of Black Rhino and growing populations of Elephant and other African wildlife. Visitors should aim to spend a few hours in one of the hides overlooking a water point as it is here that one will see game sauntering down to the water for a refreshing drink or to wallow in the mud on the banks. Nile Crocodiles, Water and Rock Monitor Lizards can all be found in the rivers.

There are 31 species of snake in the game reserve including the venomous Black-necked Spitting Cobra and Puff adders, both of which frequent the camps and visitors should be weary of where they are walking.

Up at the Hilltop Camp one can look forward to seeing Red Duiker and Blue Duiker in the scarp forest surrounding the camp and Buffalo and other game can regularly be found grazing right outside the camp’s main entrance. Although the large carnivores such as Lion, Leopard, Cheetah, Wild Dog and Spotted Hyaena are found in the reserve they are more likely to be heard, calling at night, than seen.

A great destination for the avid birder

Today the reserve is flourishing and visitors can look forward to excellent game viewing opportunities in a beautiful setting. A top bird watching destination, Hluhluwe-Imfolozi is home to a wide array of bird species from residents to migrants and regularly visitors. Some of the special species include the African Finfoot that can be seennear Memorial Gate from the Gontshi stream crossing.

The Southern Bald Ibis, Striped Pipit and the Mocking Chat are all regularly spotted on a cliff viewed from the Siwasamakhosikazi picnic spot to the south of the Hluhluwe River. Heading out along the Mbhombe self-guided walking trail at the Hilltop Camp will provide sightings of some of the scarp forest birds including the Crested Guinea fowl, Olive Bush Shrike, Lemon Dove and Green Twinspot.

Along the river, especially in fruit season, one will find a wide variety of fruit-eating birds including Crowned and Trumpeter Hornbills and Purple-crested Turacos. Visitors should also not forget to spend time at one or more of the many bird hides as any time spent there is always fruitful.

The History of the Hluhluwe-Imfolozi Game Reserve

Split into two sections, the hilly Hluhluwe Section in the north and the iMfolozi section with its rugged hills and wide jagged valleys towards the south, the first evidence of human occupation is iron smelting and metal-working sites from about 1 500 years ago during the Iron Age.

More recently the land was occupied by Dingiswayo and his Mthethwa tribe and later still by Shaka and his mighty Zulu warriors. Shaka and his tribesmen used to hunt in the area and later, from the mid- 1800s white hunters and ivory traders discovered the wildlife populations and severely hunted the game.

A remains of the White Rhino population in the area in 1895 led to the establishment of the Hluhluwe and iMfolozi game reserves in 1895 however the arrival of the tsetse fly borne nagana disease in the local cattle saw farmers calling for a de-proclamation of the reserves and the start of an extreme hunting spree over a 10 year period that saw over 100 000 heads of game slaughtered.

During this hunting spree only the Rhinos were sparred and in 1952 the sparse remaining wildlife was again protected. In 1989 the Corridor separating the two reserves was opened, incorporating them into one.

The reserve has 3 distinct vegetation types; the most widespread is the Zululand lowveld, while the higher areas are dominated by the Zululand sourveld and the rest of the reserve has patched of scarp forest. The extreme north and south of the reserve are particularly hilly with the landscape being carved out and cut through by three major rivers which then split into a number of small streams.