Ways Cheetahs adapt to their surroundings for survival

The cheetah is a survivor! Using highly adaptive traits and skills, it has carved out a perfect niche which only a cheetah can fill! Using it’s amazing body, biology, behavior and smarts, the cheetah has been a top predator for millions of years. 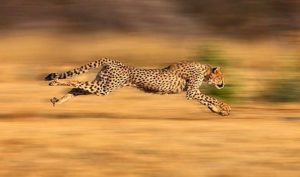 Cheetahs have evolved to fit into environments from Asia, through the Middle East, to most of the continent of Africa, including much of the desolate Sahara Desert.

Historically, cheetahs even ranged throughout Eurasia, and the plains of North America, and it is believed this is the reason for the blistering speed of the American Pronghorn Antelope, the second-fastest land animal on earth, as it evolved to keep away from the lightning-fast cheetah of the past!

The open plains of wild habitats are huge expanses, with fast, agile prey such as gazelles and antelope, and many other fast predators such as lions and wild canines.

Cheetahs survive in these competitive environments by using many different, special traits that have evolved over millennia, including an extremely flexible spine, and long legs for speed and stride length. Their muscles are long and lean like a runner, not like a brawler (like the lion or leopard), and they have light, tall bodies for their size. They have super large lungs, heart and nostrils in order to take in and use large amounts of oxygen during short, fast sprints. Unique to the cheetah are shoulder blades that do not attach to the collar bone and freely pivoting hips which give even more stretch to their 7 meter stride.

During the daytime on the plains, the scorching sun can reflect its heat and light off of the light-colored grasses and flatlands, making long-distance vision and accuracy difficult for most predators.

The head of a cheetah is smaller and more streamlined than other big cats, including the famous “tear marks,” or black markings that extend from the eyes down the muzzle, which are believed to help with the refractive glare of the sun on the wide, hot plains on which they primarily hunt. Their round, black spots on tawny, tan coats give them good camouflage while lying in the grass or in the dappled shade of brush, or while stalking prey in the beginning stage of a hunt, but they are light enough in color to decrease heat absorption during daytime activity.

Leopards are the “Kings of the Trees,” ambush predators with true cat-like-retractable claws and unmatched climbing abilities. Lions amble in near leisure on the plains due to the safety of the pride numbers, hunting in groups and using their sheer size, strength and numbers to take down large prey like zebra, giraffe, buffalo, even young elephants.

Cheetahs, on the other hand, possess semi-retractable claws (something in between the retractable claws of a leopard, and the non-retractable claws of a dog) which give extremely high traction for acceleration, break-neck turning maneuvers and rapid deceleration while hunting. Their tail is extra long to act as a balancing “rudder” while performing extreme turns at high speed. Other predators would need quite a lot of luck to catch the fastest of prey animals, but the cheetah is made for it.

The tight binding of the tibia and the fibula restrict rotation of the lower leg, stabilizing the legs for speed, although this reduces the cheetah’s climbing ability compared to a leopard. Cheetahs will also hunt during the day, while most other predators are resting or hiding.

These and other specialized adaptations give cheetahs a very special niche in which they thrive. They do well in wide open areas, hunting fast, lean, agile animals, using their excellent sight and flatland maneuverability. They climb trees only casually, and do not hide, sleep, or eat in trees like leopards.

With so many dangers from other strong predators, the cheetah chooses to avoid a fight, knowing that damage to it’s lean, runners body would be disastrous. Even many larger herbivores like zebra, eland, giraffe, hippo, rhino and the like can put up a good fight, causing significant damage to a 100 lb cat made for speed.

Cheetahs are smart enough to run from a fight, using their iconic speed, realizing their advantageous endowments and their limitations, rather than tough it out like a massively muscled lion would, or even a large herbivore such as rhino. A mother cheetah, though, to ensure the survival of her young, will attempt to fight off any who come near her cubs, sometimes and unfortunately, to her own death.

Above all, cheetahs fit perfectly into a niche which no other predator can, and their behaviors are well suited to life as the supreme speed hunter of the open plains. Their hunting style differs greatly from the stalk-pounce-wrestle style of the leopard, or the group-take-down style of the lion, and they will not scavenge like the hyena, and do not engage in long-distance marathon hunts like the African Wild Dogs. Their hunting efficiency is around 50%, but scavengers such as the jackal and hyena, or even the lion, will often steal their kill, making them an integral part of the ecosystem as a food procurer for many others.

They are uniquely adapted to thrive in their ecosystem… but in the last hundred years or so, human encroachment, killing due to misconceptions, trophy hunting, cheetah cubs being stolen for the exotic pet trade, indiscriminate poaching and other detrimental human activities, have reduced their numbers by 93%. This predator’s range has been reduced or fragmented so dramatically by human encroachment, that they are now in grave danger of extinction, with less than 8,000 adult cheetahs left in the wild.

Bush-encroachment has also become a severe threat to the cheetah’s survival in its environment. Since farmers and herders are over-grazing their livestock in grasslands where cheetahs historically hunt, heavy thorn-bush has begun take hold of the plains, as the grasses that normally contribute to a balanced variety of vegetation are grazed and trampled out of the area. These thorn bushes that normally existed only in certain areas are now covering what was once clear, open plains and grassland. Cheetahs sprinting past are often struck by thorns, leading to blindness and other injuries. And since cheetahs hunt using their large eyes and binocular vision, this bush-encroachment has become another human-made threat to their survival.

Cheetahs are now gone from more than 20 of the countries which they once prowled and contributed to a healthy balanced environment, due to human conflict. This incredibly specialized, top predator is being threatened in it’s last remaining habitats and if this flagship species becomes extinct, it’s ecosystem and the species around it will greatly suffer, not to mention the human race will have to answer for the preventable loss of yet another iconic species.