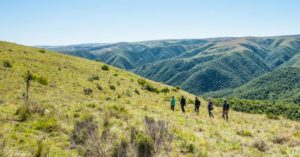 The initiative is part of the annual South African National Parks Week. The campaign is held under the running theme ‘Know Your National Parks’. It allows locals, with valid identity documents, a chance to spend a day at a national park of their choice free of charge.

The week-long campaign is at all national parks managed by SANParks, with the exception of Boulders at Table Mountain National Park and Namaqua National Park.

Some of the parks will be extending the week to include the weekend. For individual park dates, please visit: www.sanparks.org/about/events

SANParks Head of Communications, Janine Raftopoulos, on Friday said the objective of the week is to cultivate a culture of pride in all South Africans in their relationship with the country’s natural, cultural and historical heritage.

“When people start to take pride in national parks, then we believe that they will start to understand the importance of conservation,” she said.

The feature element of this campaign is the free access granted to all South African day visitors carrying their official IDs.

Persons under the age of 16 will be allowed free access without proof of identity. It should be noted that the free access to the parks will not include accommodation and any commercial activities in the park such as guided safaris in vehicles or guided walks.

This year’s SA National Parks Week will include exhibitions around the country at various key national parks, which will represent the different geographical regions of SANParks.

The expo will include cultural, conservation, nursery and tourism aspects from the community, rangers and various conservation entities in order to highlight the broader South African biodiversity landscape.

The annual SA National Parks Week has been made possible with support from First National Bank (FNB) and Total SA.

“The spin-off of this initiative is that it boosts the local communities of the areas around the parks, while creating awareness of the need to preserve our natural heritage.

“I would like to encourage all South African citizens to come out in their numbers to experience our country’s natural heritage in its abundance,” said Kgosi Ledimo, CEO of FNB Public Sector Banking.

Total South Africa has again stepped up to the plate to help South Africans access these beautiful acres of land across the country.

“Total South Africa is proud to be a long-standing partner of the SANParks Week since its inception in 2006 – 12 years ago – and our company fully endorses SANParks’ commitment to developing and promoting a system of sustainable national parks countrywide,” says Pierre-Yves Sachet, MD & CEO Total South Africa and Vice-President Total Southern Africa.

“Total views environmental conservation as a key priority and we are committed to preserving the natural environment for future generations,” Sachet said.

SANParks encourages all South Africans, especially educators and school groups, to diarise these dates and plan a visit to a national park nearby.

“The survival of the South African national parks system and our natural and cultural heritage lies in the people of South Africa,” Raftopoulos said. – SAnews.gov.za