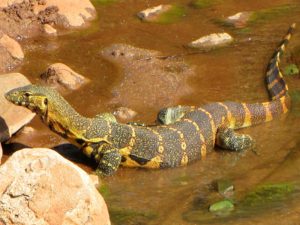 Nile monitors, the largest lizard in Africa, grow to about 180 – 210 cm in total length They have a muscular bodys, strong legs, powerful jaws and sharp claws for climbing, digging, defense, or tearing at their prey. Like all monitors they have a forked tongue, with highly developed olfactory properties. In fact they can identify prey, enemies or a mate by smell. Their nostrils are placed high on the snout, indicating that these animals are highly aquatic swimmers and divers (Nile monitors can remain underwater for more than an hour). But they are also excellent climbers (in particular when young) and quick runners on land (adults can easily outrun people over short distances). The body and tail color is gray-brown or dark olive with darker reticulation, and 6-9 yellowish bands or bands of yellow-gold ocelli. The belly is yellow with black spots.The Nile monitor lives in long self-made burrows os takes over abandoned burrows dug by other animals or abandoned termite mounds. It retreats to these burrows at night Mostly it lives solitary but if there is enough food other conspecifics are tolerated nearby. It prefers to lay its eggs into termite mounds: The female tears open the nest (in particular in the rainy season when the walls are soft) and deposits up to 60 eggs without attempting to cover them. The termites quickly repair the nest and the eggs are incubated safely, with constant heat and humidity, providing the mound remains occupied by termites. When suitable termitaria appear to be unavailable however, eggs are deposited in burrows, or holes in riverbanks or in trees along water courses Theincubation period lasts several months. Eggs collected in the wild or laid by wild caught females hatch after 141-150 days at 27-30.5oC, 120-137 days at 30oC and 92 days at 32oC During the dry season in tropical Africa and in the cooler months in temperate regions activity is reduced or suspended. Nile monitors will eat anything that fits into their mouth and can be swallowed as a whole, like fish, snails, slugs, frogs, toads, eggs (in particular crocodile eggs), birds, small mammals, young crocodiles, turtles, crabs, large insects, termites, caterpillars and carrion.

The Nile monitor (Varanus niloticus) is one of Africa’s largest lizards and also one of the continent’s most voracious predators (for its size). They are among the most interesting reptiles and they are beautiful animals, especially when young. They are amazingly strong, and it is quite difficult to hold one without being bitten.

How to recognise a Nile monitor

Nile monitors grow to about 100–140 cm (maximum 200 cm) in length (including tail); they have a stout body and powerful limbs and strong claws. Like all monitors they have a forked tongue. Their skin is tough and covered with small, bead-like scales. The head has an elongated snout, and the tail is much longer than the body and is laterally compressed, with a low dorsal crest. Adults are greyish-brown to dirty olive-brown on top of the head and back, with scattered darker blotches and light yellow ocelli and bands on the head, back and limbs. The belly and throat are paler, with black bars. Juveniles are beautifully patterned in black and bright yellow.

On land, the Nile monitor walks with a sinuous swagger and will sometimes climb trees to bask, feed or sleep.

Nile monitors use both visual and olfactory cues when sensing the environment. Their eye-sight appears to be good. They perceive their environments through visual, tactile, auditory and chemical stimuli.

Nile monitors are native to Africa and the species is distributed throughout the entire central and southern regions of the continent, including Sudan and a portion of central Egypt along the Nile River. They are not found in any of the desert regions of Africa, however, as they thrive around rivers. On the subcontinent , they occur through the eastern part of the region, extending along the Orange River to the Atlantic Ocean and Fish River Canyon, and along the South coast to Gamtoos River Valley, but is absent from the Western Cape.

Nile monitors occur in a wide variety of habitats, wherever there are permanent bodies of water; this excludes deserts. This species has been found in most other habitats, including grassland, scrub, forests, mangroves, swamps, lakes and rivers. They live in long, self-made burrows or take over abandoned burrows dug by other animals, or abandoned termite mounds.

Nile monitors are carnivores with an almost insatiable appetite, they are renowned for eating just about anything they can overpower or find as carrion. Consequently, their diet includes everything from arthropods, amphibians and fish, to birds, small mammals and other reptiles. Hunting strategies vary, but it is rare for the Nile monitor to shy away from a challenge.

Nile monitors are usually solitary, with only occasional intra-species interaction outside the mating season. When inactive, they bask or rest on waterside vegetation, trees, logs and rocks, often in a prominent position. In the colder parts of South Africa, they hibernate in big rock cracks or burrows. When walking and foraging, the Nile monitor holds its body well off the ground, and uses its long, forked tongue to sense potential food sources. Nile monitors are usually wary and if approached, will run away or jump into the water and swim underwater to the safety of the reed beds. While one monitor provokes a female crocodile away from a nesting site, another will dig up the unguarded eggs.

Nile monitors are a polygynandrous species and will mate promiscuously.

They prefer to lay eggs in termite mounds, the female tears open the nest, particularly in the rainy season when the walls are soft, and deposits up to 60 eggs without attempting to cover them.

Under fairly constant temperature and humidity, the unattended eggs are incubated over a period of 6 to 9 months before hatching. The brightly coloured hatchlings survive on a diet comprised of insects, spiders, snails and other small animals, and reach maturity after three to four years. They breed once annually, with the season starting in June and ending in October throughout its range.

Mating and egg-laying usually follows the rainy season, which varies regionally. This season correlates with the development of the gonads. The testicles of males are enlarged from June until September while the females are being sought. Regression of the gonads subsequently occurs until January and then the cycle recommences.

Young Nile monitors often remain in groups and one of them may temporarily behave as a leader. They engage in mutual tongue-licking and grooming, dewlap extension and body rubbing, and at night they often sleep together on branches.

Estimates vary, but the expected lifespan in captivity is reported at between 10 and 20 years.

Nile monitors are not just reptiles, they play an essential role in balancing nature, and removing these links can have a roll-on effect, disturbing or upsetting the balance of other plants and animals. They play an important role in food chains.

They are well-camouflaged, which helps them to avoid potential predators. They can adapt to cold weather regions by hibernating during colder months.

Crocodiles and pythons are major predators on the adults. Other potential predators are leopards, eagles and humans. Predatory fish, herons, snakes and even adults of their own species prey on young.

This species is more vulnerable on land and if threatened will normally do its best to avoid injury and will flee to the safety of deep water. When escape is not an easy option, it will boldly defend itself, using its hefty tail, sharp teeth and powerful claws to injure or frighten away the aggressor. They are powerful swimmers.

If cornered and threatened, a Nile monitor will arch its back and stand at full stretch on its legs, hissing as the body inflates and flicking the tail sideways. The lashing tail can inflict a painful wound. As a last resort, a cornered Nile monitor will bite and eject foul-smelling musk from the cloaca to attack or throw off a pursuer/attacker.

Nile monitors are occasionally kept as pets by reptile hobbyists, but these large and aggressive lizards are a poor choice as a pet, except perhaps for very experienced keepers who can provide large enclosures.

Conservation status and what the future holds

In 1975, some North African countries replaced the Wild Animals Law created in 1963 with a new law that gives protection to crocodiles, pythons and monitor lizards. Nile monitors are also listed under the Endangered Species Decree of 1985, which means that international trade of the species in prohibited.

There are several subgenera in the genus Varanus; the Nile monitor falls under subgenus Polydaedalus. The white-throated or rock monitor (Varanus albigularis albigularis) is its closest relative in southern Africa. Further north in Africa, the ornate monitor or forest water monitor (Varanus omatus), previously considered a subspecies of the Nile monitor, has been elevated to full species status in 1997.