It’s a Myth That Cheetahs Overheat While Hunting 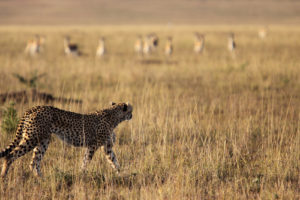 IN 1973, TWO Harvard scientists bought a couple of hand-reared cheetahs from an African farmer, flew the animals over to their laboratory, made them run on treadmills, and stuck thermometers up their bums. Based on the readings, they concluded that cheetahs can’t lose heat quickly enough while running. Once their body temperature hits 40.5 degrees Celsius, they’re forced to stop.

It was a groundbreaking experiment, but an incredibly artificial one. The cheetahs had lived in captivity for their entire lives, and they were running in a lab rather than a savannah. They ran at 30 kilometres per hour for 2 kilometres whereas, in the wild, they sprint for just a few hundred metres but at speeds of up to 100 km per hour.

And yet, based on this single contrived set-up, it became common knowledge that cheetahs abandon hunts because they overheat. You’ll find that little factoid in zoo placards, books, and wildlife documentaries. It seems plausible, especially since cheetahs are the world’s fastest land animals. They’re also relatively inefficient hunters that only kill 40 percent of the prey they chase. In some cases, they seem to give up even when their quarry is within range. Is that because they get too hot? Sure. Why not? It has the ring of truth.

Robyn Hetem from the University of Witwatersrand in South Africa has disproved this myth by actually studying wild hunting cheetahs. She worked with six animals from the Tusk Trust Cheetah Rehabiliation Park, which allows orphaned or injured animals to hone their hunting skills before returning to the wild. Her team surgically implanted two sensors into each cheetah—one in their hips to track their movements, and another in their bellies to track their temperature. For seven months, the cheetahs did their thing and Hetem watched.

Her data showed that their body temperature naturally fluctuates between 37.3 and 39.5°C over the course of a day, and hunting doesn’t change that. Despite their enormous speed and acceleration, they barely get any hotter while sprinting. And while they finished successful hunts with an average body temperature of 38.4°C, they finished unsuccessful ones at… 38.3°C. That’s a definition of “overheating” that I’m unfamiliar with.

Clearly, cheetahs don’t give up because of heat. They do, however, heat up more if they actually catch something. In the 40 minutes after they stopped, their temperature rose by 0.5°C if they had flubbed their chases, but by 1.3°C if they made a kill.

Instead, Hetem thinks it’s a sign of stress. Cheetahs are built for speed not strength, and they can be easily overpowered by other plains predators like lions, hyenas or leopards. Indeed, a leopard actually killed two of the six cheetahs that Hetem was studying! This means that a freshly killed carcass could attract deadly competitors, as well as providing a meal, which is why other biologists have described cheetahs as being “nervous at kills” and “alert when feeding”. Hetem thinks that their temperatures rise as a result.

Of course, none of this explains why cheetahs abandon chases early. Perhaps Alan Wilson’s work might eventually provide an answer, using the astonishing collars he developed to track the movements of wild cheetahs. These same collars helped to check another cheetah factoid—the idea that they can actually hit top speeds of 100 km per hour. That was also based on a single artificial study, but to the relief of cheetah fans everywhere, it turned out to be right. Wildcheetahs do actually get very close to that speed when they hunt.