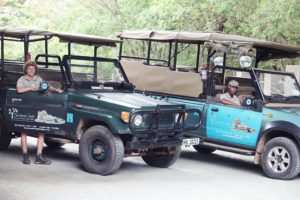 8 Tips to get the Most from your Game Drive

1) Understand how a game drive works

Some people like to live in suspense and take life as it comes. If that’s you, you can skip this part! Others get more from an experience if they understand how it works…

Broadly speaking private game lodges offer open vehicle game drives with anything from 4-6 people (at the most expensive lodges) up to 10 people on a game vehicle, usually somewhere in between. There is a place for one person next to the ranger (more on that later) and then three rows of seats usually each one a little higher than the last. The drive usually lasts around 3 to 4 hours depending on what you see and there’s a break for morning coffee/tea and for evening sundowners which is also an opportunity for a bush loo stop.

Usually the ranger will be in radio contact with other vehicles. Either belonging to the same lodge and/or neighboring lodges traversing the same area. This is a good thing because more eyes out in the bush mean more sightings and everyone wins. But of course there is an etiquette involved here! A private game reserve doesn’t want 10 vehicles converging on a sighting all at once. As this disturbs the animals, the tranquility of the bush and throws your chances of getting a stunning photo badly off-kilter.

So when a vehicle comes across a major sighting such as one of the so-called Big Five, or wild dog cheetah etc, they spend a few minutes enjoying the sighting in peace before radioing in to other vehicles. There then follows a delicate ‘dance’ between the rangers as to who heads to the sighting next depending on their distance away. Usually two and not more than three vehicles are allowed at a sighting at any one time. If you are second to a sighting, you cannot immediately go in front and take the best vantage point thus ruining the experience for the original vehicle. However as they move off, your ranger can move the vehicle into a better spot for photos.

Your ranger will try to ensure that all people on the vehicle can get a decent photo. Please keep in mind that depending on the terrain, the animal’s behavior and the lighting, this is not always possible…

Sometimes you may find yourselves in a sort of ‘queue’. Of course a good ranger will not make this obvious to you and will occupy the time discussing other things. The private game lodges generally stick to the reserve roads but are allowed to go off road to follow a major sighting. However whether they do so or not depends on the terrain. It might look fine to you but they will know that there is major ‘donga’ (sharp steep cleft in the bush uncrossable) for example.

In an “ideal” game drive, you will have a mix of good, sometimes even exciting sightings with plenty of time to just appreciate the animals, lots of discussion with your ranger and also the chance to learn about other aspects of the bush such as plants, birds, how to track animals, how to know which animal passed on the basis of their dung etc.

However not every game drive is an epic one just as not every day will be the best day ever. Some drives are quiet. Sometimes this is because of the weather – a strong wind or a cold front affects animals as much as humans. Sometimes you’re just not lucky!

I go into this in some detail in our What to Wear guide but as far as the actual game drive goes, try to have the following:
• Camera – See next point
• Binoculars – the best you can afford and ideally one for each person
• Sunblock
• Wide brimmed hat for summer, and woolly beanie for winter
• Animal and bird books – usually on sales in the lodge shop if you don’t already have
• For bush loo stops – some tissue & a bag to put it in afterwards, hand sanitizer
• Layers of clothing for late autumn to spring
• Mosquito repellent for summer
• Water (if the lodge doesn’t provide it)

For families
• Simple animal check-list – great for keeping kids motivated
• Access to photography whether it is a disposable camera or borrowing your camera phone
• Binoculars – ideally one for each family member – have I said that before? Shall I say it again
• Dried fruits if your kids are likely to get hungry (though snacks are provided at the break)

3) Sit in the middle of the vehicle

This gives you the best of all worlds. You are high up so animal sightings are good, but not so far back that you can’t ask questions of the ranger.

However each seat has pros and cons. The front seat is ideal for older less mobile people and in winter, it is definitely the warmest. But your sightings are not nearly as good because you don’t have the height.
The first seat is ideal if you like to ask a lot of questions and you have an unobstructed view to the front (my preference). The middle row gives you greater height but you can still hear the ranger.

The back seat is a love it or hate it experience. My husband reverts to being a naughty schoolboy at the back of the bus (much giggling and in-jokes with the kids). It is definitely the bumpiest option and also the coldest in winter but you do have the added advantage of being able to look over your shoulder at what is behind the vehicle – ideal if a line of animals such as a pack of wild dogs has just walked from the front to the back.

This does what it says on the tin. The more you ask, the more you learn. Some rangers have verbal diahrea but most have way more knowledge than they can possibly share with their guests, so keep asking questions.

As a couple, the best way to get the best shots (unless one of you is a much better photographer ) is for one person to have a camera with a good zoom lens and the other to have a camera set on a general or wide lens setting. That way you are prepared to take both the close-up shot of the lion and the glorious sunset shot over the waterhole without having to constantly change the lens.

Some game rangers ask people what they want to see. Though I can understand why they do this – they want to know if someone is really into birds or elephants or giraffes – inevitably someone says that they want to see a leopard or a cheetah, two of the most elusive animals in the bush. Then the ranger has made a rod for his own back! Why does he do this?

Sure, give your ranger an idea of something that you would like to see. But try to have as few expectations as possible. If it’s a quiet drive, ask lots of questions and get the ranger sharing his knowledge with you.

Your game ranger will try to make sure that everyone in the vehicle is happy. That might entail staying longer at a sighting than you personally want so that everyone can get a good shot. Similarly you may have wanted to stay longer with some animals but others are keen to see an important sighting which is nearby. Try to go with the flow.

Generally speaking the shared game vehicle will be fine for most people. Private vehicles can cost quite a bit extra, depending on how the lodge prices it. (Some charge per vehicle and some charge per empty seat so that if there are only two of you…)

However if you are either a) keen birders or b) keen photographers, I recommend considering a private vehicle as your needs and wants differ from the average safari visitor. In the case of birders, you may not be interested in spending time at the usual animal sightings which other people want. In the case of photographers, you will probably want to spend far longer at a sighting than most people, waiting for the right light or the right angle.