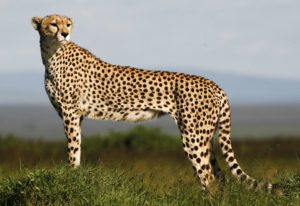 Known for being the world’s fastest land animal, the cheetah is a large feline that can run up to 75 miles per hour in short bursts to cover distances up to 1,600 feet and accelerate to over 60 miles per hour within just three seconds!

Easily recognizable from the other popular big cats for their spotted coat, characteristic “tear stripes” from the corner of the eyes, and smaller size, the cheetah possesses a lean, long-legged build manufactured for speed. Read on to learn more fun facts about cheetahs and find out why this fast cat is a true marvel of evolution.

WHERE DO CHEETAHS LIVE?

Historically, cheetahs were once found throughout all of the African and Asian continents from the far reaches of South Africa all the way to India. However, the species is now confined to parts of eastern, central, and southwestern Africa with small isolated populations found in southwestern Asia. Still retaining a rather wide distribution through most of sub-Saharan Africa, including Zambia, Mozambique, and Zimbabwe, the largest populations of cheetahs today are found on African natural reserves or parks.

Found mostly in grassy savannah plains, scrub forests, grasslands, and semi-arid deserts, cheetahs need to inhabit areas that are infinitely open with plenty of area to roam or run after their prey. Since cheetahs rely on being able to camouflage themselves in the grass while stalking after their dinner, the animals are mostly seen in areas that have thick vegetation and where their favorite foods are located. 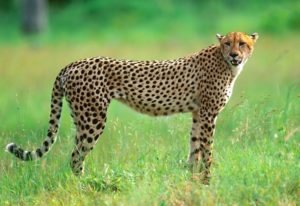 WHAT DO CHEETAHS EAT?

As a truly carnivorous animal that depends on meat for survival, the cheetah utilizing its speed to hunt various prey that inhabit the open or partially open savannah. In general, the diet of the cheetah consists of gazelles, wildebeest calves, impalas, and smaller hoofed animals in its habitat. Furthermore, cheetahs may eat rabbits, birds, hares, antelopes, and warthogs. Since water can be very scarce in its native land, cheetahs have the ability to survive with just one drink every three or four days.

Camouflaged against the tall grasses, cheetahs quietly sneak up on their prey until they are confident about the attack, burst out using their tail as a rudder, trip the animal with their paw, and then suffocate it with a bite to the neck. After making the kill, cheetahs must eat quickly or drag the food to a hiding spot before any lions, leopards, or hyenas steal it. While they may be the speediest animal, only half of the 20-60 second hunts are actually successful. 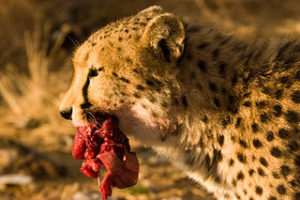 Since the animals can reach top speeds in no time, cheetahs have a slender body frame that is both lightweight and aerodynamic. Averaging a shoulder height of 30 inches, most cheetahs are between 110 to 140 pounds on their small stature. With long legs, loose hip joints, and a flexible spine, cheetahs have the ability to cover up to 25 feet in one stride. Their muscular legs mainly consists of fast twitch fibers to contract much faster than normal, while their wide nostrils and lungs provide more oxygen for sprints.

As one of the species’ trademark features, cheetahs have coarse short fur that is tan with round black spots and black “tear stripes” running from the corner of the eyes down the side of the nose for keeping sunlight out of their eyes. While it is generally shorter-bodied, cheetahs are taller and have a longer tail ending in a bushy white tuft for a more streamlined appearance. Designed to grip the grass floor, the cheetah has blunt non-retractable claws for traction. 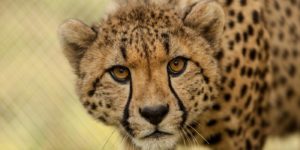 Unlike lions or hyenas, cheetahs are diurnal animals with poor night vision that prefer to hunt their prey through the daytime hours, especially in the late morning and early evening. While they are typically solitary animals and females generally raise their cubs in solitude, they are thought to be the most sociable big cat because siblings stay together for six months after leaving the mother and male cheetahs sometimes live with a small group of brothers from the same litter for life. Males are often aggressive towards other males when battling to mate with a female, but cheetahs will give up their catch to another larger animal to avoid a fight.

Maturing rather rapidly, males are ready to mate when they are one year old and females will be ready to do so when they are two years old. As animals that engage in a behavior called polygyny, male and female cheetahs will mate with many different members of the opposite sex during their lifetime. After a female gives birth, she will feed the young milk from her body, protect them from predators, begin teaching them to hunt, and eventually leave them alone at one year of age.

Unlike most other big wild cats, cheetahs breed throughout the year without a regular established mating season. However, the seasons where there is a better food supply is when most of the breeding will occur.

Once fertilization has occurred, the pregnancy period will last for approximately three months and the male cheetah will not remain with the female after mating.

After gestation, female cheetahs can give birth to a litter of up to eight cubs. Since the young cheetahs are at particular danger of attack from predators, the cubs have a distinctive smoky coat color with wooly hair down their backs to camouflage them in the tall grass.

According to the International Union for Conservation of Nature, it is estimated that there are between 9,000 and 12,000 cheetahs remaining in the wild in Africa with a small pocket of around 200 cheetahs living in isolation in Iran. Once a wide-ranging species with over 100,000 the range a century ago, the dramatic decrease in cheetah population is alarming.

While they may be the fastest land animal, wildlife biologists have begun to question whether they can outrun extinction. Currently classified as an endangered species, cheetahs have a long history of being placed in danger of over-hunting for their prized coats in the fur trade. However, the real threats to the cheetah today are loss of habitat on an increasingly crowded continent, competition from other large predators or ranchers, and a loss of genetic variation.