Amazing facts about the Cheetah

The cheetah is the fastest land animal in the world, reaching speeds of up to 113km/h. They can accelerate from 0 to 100km/h in just 3 seconds. 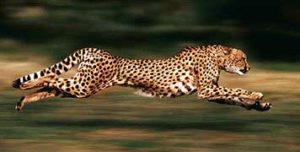 Amazing Facts About the Cheetah

Built for speed, cheetahs are slender, with long thin legs and a long tail. They have coarse, short fur that is yellowish tan in colour and covered in solid black spots. Black tear-shaped streaks on the face help to reflect the sun when hunting. Adults weigh around 46–158 lb (21–72 kg).

How many spots do cheetahs have?

Cheetahs have between 2,000 and 3,000 spots, which help them to camouflage themselves.

Where do cheetahs live?

Previously, cheetahs were wide-spread across African and Asian continents, but now they are confined mostly to dry open grasslands of Sub-Saharan Africa, with the majority inhabiting natural reserves or parks.

What do cheetahs eat?

Cheetahs are carnivores, so rely on meat for survival. Their diet is made up primarily of smaller antelopes including springbok, steenbok, Thomson’s gazelle, impalas, and duiker. Cheetahs will also feed on wildebeest calves and, occasionally, smaller animals including rabbits, hares and birds.

How often do cheetahs drink?

Cheetahs have evolved to live in an environment where water is scarce, and can survive on one drink every three to four days.

Female cheetahs are solitary, living alone or with their young. Males however, live in small family groups of 2–3 brothers, known as coalitions.

How fast can cheetahs run?

The cheetah is the fastest land animal in the world, reaching speeds of up to 70 miles per hour. They can accelerate from 0 to 68 miles per hour in just three seconds. Cheetahs are the only big cat that can turn in mid-air while sprinting.

How does the cheetahs tail help when running?

Cheetahs long muscular tails have a flat shape that is used for balance and steering. The tail essentially acts like a rudder on a boat.

Where do cheetahs give birth?

Cheetahs start reproducing at a young age; males at the age of one and females at two. There is no specific breeding season and cheetahs will mate with many individuals throughout their lifetimes.

Male cheetahs do not remain with the females after mating, and do not play any role in rearing young. Female cheetahs on the other hand are caring, affectionate and dedicated mothers. Following a pregnancy of three months, female cheetahs will give birth to a litter of 2–8 cubs in a secluded spot such as a rocky outcrop or marshy area with tall grass.

Cubs are vulnerable to predators, and many do not survive the first year. Initially, mothers leave the cubs hidden whilst hunting, but cubs will start accompanying her at around six weeks.

How long do cubs stay with their mothers?

Female cheetahs spend a long time caring for their cubs and teaching them essential survival skills like hunting. Cubs typically stay with their mothers for one and a half to two years.

What is the biggest threat to cheetahs?

Cheetahs are classified as vulnerable by the IUCN Red List of Threatened Species. With around 10,000–12,000 individuals left in the wild, cheetahs are Africa’s most endangered big cat.

Historically, cheetahs have been hunted for their fur, but today some of the biggest threats to their survival are loss of habitat, and competition for resources. Cheetahs require large areas of land for survival, so increased human settlements and road construction in their habitat puts them at risk.