10 endangered animals in South Africa and how you can help 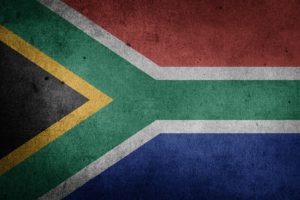 Endangered animals – there’s more to this than rhinos! Here are some other endangered animals in South Africa, as well as easy ways to contribute towards their conservation.
Albert Einstein, in all his scientific glory once said, ‘Our task must be to free ourselves… by widening our circle of compassion to embrace all living creatures and the whole of nature and its beauty.’ This is not a difficult task in South Africa, seeing as we have such a magnitude of inspiring creatures that live in our midst.

However, some endangered animals get more attention than others. From amphibians to antelope to The IUCN (The International Union for the Conservation of Nature) has created a Red List on which they publish endless amounts of endangered animals from around the world that face human-induced threats to their survival on a daily basis.

We all know that the rhino is in a very vulnerable position – the western black rhino is already declared extinct and elephants are also constantly hunted for their ivory, but there are many less obvious animals that are currently endangered in South Africa. It’s easy to overlook an animal that is only 3cm long, but once you know of its existence, it’s hard not to care about its future. The Pickersgill’s reed frog is one of the most endangered amphibians in South Africa. It’s endemic to the coastline of KwaZulu-Natal where their numbers are shockingly low and vastly spread out along the coast. IUCN Red List status: Vulnerable
We easily underestimate the importance of vultures, perhaps because the term in itself has quite a negative connotation. But the essence of being a vulture is to clean up, and therefore, do good. By eating off carcasses they prevent diseases from spreading amongst the animal kingdom. Cape Vultures are only found in Southern Africa, limiting the already decreasing population.

Major threats
Loss of habitat, electrocution on pylons or collision with cables and unintentional poisoning.

Current conservation efforts
VulPro is one of the leading Cape Vulture conservation organisations in the country. They aim not only to conserve and protect Cape Vultures but also to raise awareness around them. They launched a breeding and rehabilitation project fairly recently and the first captive bred vulture chick hatched on 1 September last year at the Johannesburg Zoo. 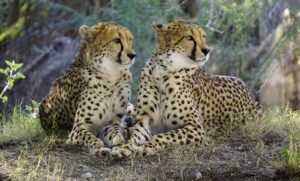 No one can deny the grace and beauty of the fastest land animal on earth. These beauties have been the subject of countless incredible wildlife images, with their dark tear stains and perfectly spotted agile bodies. Unfortunately, many farmers don’t feel the same because cheetahs are smart enough to know that a sheep is a much easier catch than an antelope on the run. Many farmers end up poisoning, shooting or trapping the cheetah culprits.

Current conservation efforts
Cheetah Outreach in Somerset West and the Cheetah Conservation Fund in Namibia are but two organisations that are dedicated to conserving cheetahs in their natural habitat. Both have active guard dog programmes that place Anatolian shepherd dogs on farms to chase away predators. As cheetahs aren’t aggressive animals, they’ll rather find dinner somewhere else than face a physical confrontation. These programmes have proven to be very successful. The wild dog of Thornybush. Photo by Greg de Klerk.

There has long existed a very negative misconception around the African wild dog, or painted dog. Because of this, there are fewer than 450 painted dogs left in South Africa. Violent snaring of wild dogs is one of the most brutal ways of killing, and unfortunately this happens much too often in our wildernesses.

Current conservation efforts
There are many conservation organisations spread out around Africa that are working hard to protect the African wild dog in its natural habitat. In South Africa, the only viable population exists in the Kruger National Park, and the Endangered Wildlife Trust has sponsored a major monitoring and reintroduction programme here. They have already successfully reintroduced wild dogs into the park and hope to continue doing this great work. 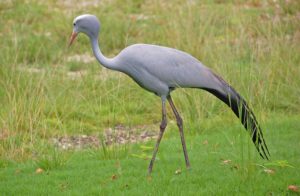 IUCN Red List status: Vulnerable
The blue crane is South Africa’s national bird, and although there are small pockets and occasional breeding pairs found in neighbouring countries, they are mostly found in the Western Cape. Because they have a blind spot in the vision, they tend to collide with power lines and since they have very long, dangly legs, the get entangled in the wires. 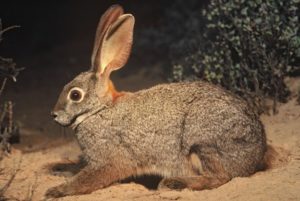 This little nocturnal rabbit can only be found in the Karoo regions and is currently the most endangered mammal in South Africa. It only lives in the deep silt flood plains of seasonal Karoo rivers and can’t be found anywhere else in the world, making it incredibly vulnerable to habitat loss.

Major threats
Loss of habitat due to cultivation and livestock farming 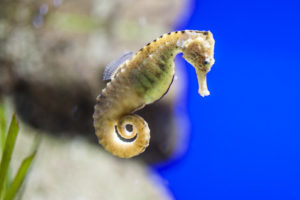 This delicate little creature, with a head like a horse and a tail with a perfect curl, occurs naturally in three estuaries around the country, namely Knysna, Swartvlei, and Keurbooms. Unfortunately, the Knysna estuary is also very important to South Africa’s fishing industry and the major industrial developments are proving challenging for the seahorse’s survival. The continuous urban expansion is not helping either.

Current conservation efforts?
SANParks are doing their bit to restrict further urban development around the Knysna estuary. The Knysna Basin Project have been doing research from a small field station since the early 90’s and their reports also contribute to a better protected lagoon and estuary. 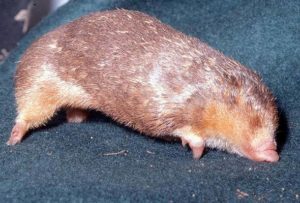 Golden Moles rank surprisingly high on the list of most endangered animals in South Africa; with five different species reaching the top ten most endangered mammals in the country. You may not see them often, but these tiny diggers are on their way to extinction.

Juliana’s golden moles are currently protected in the southwestern area of the Kruger National Park (Mpumalanga), and in the Nylsvley Nature Reserve in the Northern Province. The University of Pretoria and Cape Town have both done extensive research on the habitat and survival of the golden moles.
The Endangered Wildlife Trust’s (EWT) Threatened Grassland Species Programme aims to conserve the habitat of the golden mole. 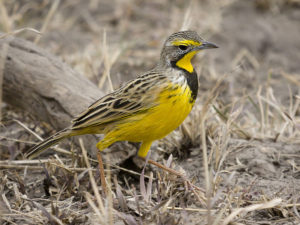 These cheerful-looking birds occur mostly in the highland grasslands of the Drakensberg, a beautiful region, but also South Africa’s most threatened grassland biome. They are endemic to South Africa, in the area near Dullstroom in Mpumalanga to the northern section of the Eastern Cape and also a small section of Lesotho.

Major threats?
Habitat loss due to commercial livestock farming in the areas where they stay 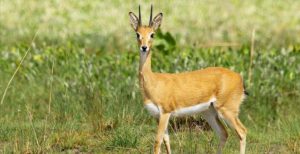 On an international scale, the oribi may not be very endangered, but it’s actually one of the most endangered antelope that roam the South African plains. It’s called a specialist grazer because it doesn’t eat just any type of grass and therefore it’s incredibly vulnerable to habitat loss.

Current conservation efforts?
There exists an illegal hunting forum to assist with illegal hunting and poaching issues. An Oribi Working Group has been established within the Endangered Wildlife Trust to focus on their specific habitats and on conserving them.