Durban arguably is the warmest place to be this summer making snorkeling the perfect activity. We headed out to a local beach to do some snorkeling and collect fish for Ahmed’s marine tank. This is a must for anyone visiting Durban on holiday and for those that live here, get yourself a pair of snorkels and head on down to the nearest rocky stretch of beach before the summer ends!

The best thing about Durban is its warm seas. Durban’s ‘all year round summer’ translates into sea temperatures, even in winter, that hover around 20 degrees Celsius.

Even Durban’s summer sea temperatures are more akin to a bath than the sea, and you can spend hours in the water without feeling the cold.

If this weren’t enough of an invitation (bearing in mind that you may need to live in the sea between January and March as the city’s humidity can get unbearable), the clarity of the water and the phenomenal sea life also make Durban the perfect place to snorkel, particularly along the north coast (Ballito, Salt Rock and Sheffield areas).

Here are 4 of the best snorkeling spots on Durbans Coast… 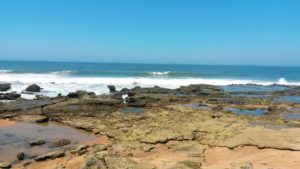 Umdloti (pronounced Umshlowti), 20 km north of Durban, is a wonderful seaside village regarded as one of Durban’s northern suburbs. It manages to retain that ‘sleepy hollow’ atmosphere whilst being close enough to Durban and Umhlanga to function as an easy commute.

For those who live here the beach is an integral part of daily life. From early in the morning surfers are out on the waves, whilst once the wind is up kite-surfers hit the surf. In summer school holidays the beach is literally full to bursting, so get there early.

But it is the tidal pool(s) that are the star of the show. The main swimming beach is protected by both a rocky offshore reef and what remains of an artificial tidal pool development. But take the tide into account. Low tide gives you access, even on the surface, to a myriad tidal pools on the southern portion of the swimming area.

The swimming area itself is only waist deep and, if you’re prepared to head out to where the reef is visible, provides wonderful snorkeling opportunities, particularly the deeper holes close to the wall. Be brave and swim in the deeper areas where the water flows into the bay for a larger variety of fish, particularly around and between the man-made concrete pillars (you won’t struggle to find it as someone is always snorkeling).

See: Shoals of flagtails, strepies, and the odd blacktail, convict surgeon, spot damsels, coral, colourful sponges, and anemones.
Downside: Visibility is not always excellent because of water flowing into the bay. Go at low tide! High tide creates rip tides in the channels that are very dangerous.
Tip: Swell size of around 4 feet is a great time to snorkel here. 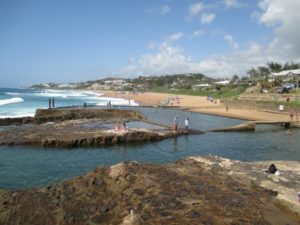 The tidal pool at Salt Rock, just north of the beach and directly opposite the campsite, is a delight and perfect for first-time snorkellers and children. It is very safe, calm and easy to access. Interestingly this tidal pool was originally built for guests of the hotel on the cliff above the pool.

Just next to it Salt Rock main beach is one of few long, sandy beaches in Ballito and arguably the best swimming beach on the coastline – it is less rocky and the surf is excellent for swimming, which means it gets really busy during the holiday season.

The best time time to snorkel in the tidal pool is when the crowds have left – autumn, spring and winter – although wearing a wetsuit is probably in order for you’ll want to spend hours in the water as the fish are so accessible, particularly the resident parrot fish.

But the pool’s accessibility is also what makes it so vulnerable to those who do not respect the marine creatures whose home it is. Rare corals have been known to grow in these pools. Please remove nothing! 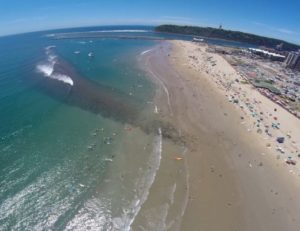 Vetch’s Pier (pronounced by the locals as ‘Vetchies’) is one of the most southern beaches on Durban’s main beachfront, sometimes also called the yacht club beach. Most people know it as uShaka Beach, but actually Vetch’s Pier is just south of uShaka Beach, right up against the harbour wall.

Snorkeling here is great all year round, but particularly during winter, and it’s a popular dive site (Calypso Dive Centre is based on the beachfront directly in front of Vetch’s Pier).

Vetch’s is sheltered because of the reef, which results in an amazing variety of marine life. Head to the harbour wall – one of the best snorkeling spots in Durban about which few people know – where there is the best coral available on this coastline in shallow waters.

See: Rays, octopus, tobies, electric rays, damsel fish, moray eels, shoals of fusiliers, chocolate dips, and butterfly fish.
Downside: The weekends and school holidays are incredibly busy.
Tip: Best time is at low tide, the day after the southerly wind, or if there is a southerly swell at sea (then it’s clearer). Luckily Vetch’s is no longer under threat from the Durban Point waterfront development.

One of the best, and consequently most popular, snorkeling spots on Durban’s coast. Rocky Bay, as it is better known, is roughly 45 minutes’ south of Durban, close to Scottburgh.

There are three spots to snorkel here. The first is just south of the caravan park, across several large boulders where you will come to a big, protected pool. This is one of the best places for blue spotted ribbontail rays.

The second spot is just in front of the southern-most campsite where a deep, narrow gully runs in front of a series of large granite boulders.

The third spot is regarded as the best snorkeling space at Rocky Bay – right in front of the boat launching area where a long reef runs out to sea. At low tide this is very safe. In fact the whole bay is riddled with shoals of fish. 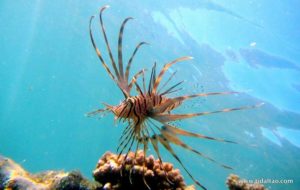 For excellent snorkeling trips with a solid caring and ethical core as well as fabulous night walks etc.