St Lucia in all it’s beauty 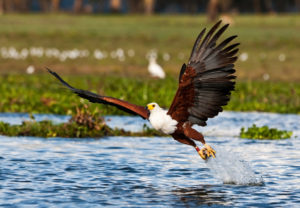 The park has 280km of near pristine coastline and comprises of 328 000 hectares of magnificent scenery. Greater St Lucia Wetlands Park encompasses an immense mosaic of habitats ranging from marine systems (coral reefs and beaches) and coastal forests (from salt and fresh water marshes to the open estuarine waters of Lake St Lucia itself) from lush coastal plains to the drier woodland areas. This is a remarkably beautiful place in South Africa.

The park is situated in the southern end of the Mozambique coastal plain near the towns of St Lucia, Mtubatuba, Hluhluwe, Mkuze, Mbaswana and Manguzi. This is a transitional zone in terms of fauna and flora between the temperate forms of the south and the tropical forms in the north and many species are endemic to this coastal plain. The protected area is home to the largest population of hippopotamus and approximately 1,000 crocodiles as well as a wealth of plant and animal life. 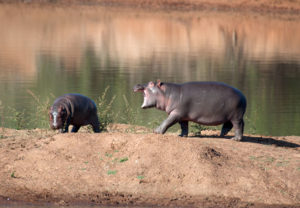 The largest mammal found in the Greater St Lucia Wetlands Park is the humpback whale and on land the African Elephant. In 2001 Elephant was introduced into the wetlands system and this has brought this area closer to “big five” status and has re-introduced a key ecological vector. Other mammals include Buffalo, Rhino, Zebra, Eland and Kudu. Wildlife Safaris on horseback is an extraordinary experience as the game see you as part of the horse and don’t frighten easily which affords you the opportunity to get up close to the animals.

Of great interest is the staggering array of birdlife to be found in the St Lucia Wetlands. Over 500 different species of birds are resident or pass through the wetland system annually and comprise of marine, wetland and forest birds.

The park has one of the most diverse variety of frogs and their choruses can often be heard at night and on dull rainy days. The highly endangered gaboon adder and a large variety of other snake species reside in this subtropical coastal dune forest.

Other reptiles, such as the marine turtles, the Leatherback Turtle and Loggerhead Turtles utilise the protective beaches of the St Lucia Wetlands Park to breed in November of each year.

The St Lucia Wetlands Park is a popular destination and offers a wide range of activities. Fishing, boating and bird-watching, scuba-diving, hiking and camping are all on offer and the region offers marvellous photographic opportunities to the amateur and professional photographer alike.