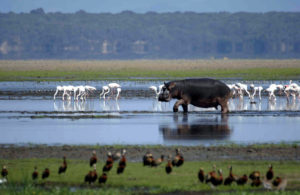 Situated in KwaZulu Natal, South Africa, this Wetland Park covers an incredible 332000 hectares. Its a place of wonder, miracles and wildlife. The largest Estuarine system in Africa (St Lucia Estuary) 526 bird species and the second highest vegetated sand dunes are just some f the incredible sightings that await you while in iSimangaliso Wetland Park.

Its with out a doubt a wildlife paradise.

Their are 5 predominant interlinked ecosystems found in the iSimangaliso Wetland Park. The species list of iSimangaliso Wetland Park are of the lengthiest in the region. Over 6500 plant and animal species including 521 bird species. The diversity of habitats (Aquatic, Coastal, Wetland and Terrestrial) supports an impressive array of animal species.

Consisting of 13 separate but contiguous conservation units totalling 239 566 hectares and 85000 hectares of marine reserves. Conservation dates back to 1895  created by the Zululand government.

220 kilometres of pristine, protected coastline makes for a vast range of beaches to enjoy throughout the Park.

The coastline stretches from Maphelane in the south to the Kosi Bay mouth near the Mozambique border and offers visitors a wide range of pristine beaches. The water temperature of the Indian Ocean ranges between 19°C in mid winter (June–July) to approximately 29°C in mid summer (Dec–Feb).

The most accessible bathing beaches are at Cape Vidal and Sodwana Bay. St Lucia beaches are very popular with day visitors. Unspoiled stretches of beach can be found at Black Rock, Nine Mile Beach, Lala Nek, Bhanga Nek and Mabibi along the Coastal Forest section of iSimangaliso. Most of the bathing beaches have ablution facilities for day visitors. 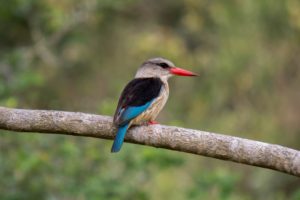 With over 520 bird species recorded in the Park, iSimangaliso is a bird-watcher’s paradise.

iSimangaliso offers some of SA’s finest birding, with 526 bird species recorded throughout the Park. Wetlands are renowned for huge numbers of water birds such as flocks of pelicans, storks and flamingos congregating alongside specials such as Pinkthroated Longclaws, Pygmy Geese and Lesser Jacanas.

The uMkhuze section of the Park is a renowned birding destination, hosting 420 of the Park’s recorded species. It is also one of the country’s only pelican nesting sites.

See hippo and crocodiles in their natural habitat from the comfort of a custom-built passenger ferry.

Discover Lake St Lucia in comfort aboard a ferry that is able to venture into the shallow waters of the lake. Depart from one of two jetties on a two-hour estuary boat cruise, stopping at interesting sightings along the way.

Close encounters with hippo and crocodiles are the main attraction of this tour. Knowledgeable guides provide commentary on the workings of Africa’s largest estuarine system. A wide variety of bird life including fish eagles, kingfishers and herons are normally spotted on the tour.

Licensed bar services and toilet facilities are available on board the larger boats. The smaller boats offer a more intimate experience while the large ones are ideal for groups, schools and functions. Catering can be done on some of the boats by prior appointment.

The iSimangaliso coastline has attracted many avid fishermen to its shores. The lakes and ocean are teeming with fish. Sodwana Bay and St Lucia are particularly favoured as fishing destinations. The warm waters off the coast are a result of of the Agulhas current coming in close to the shore. A continental shelf lying within 1-3km of the shore is responsible for the deep trenches that attract game fish.

Anglers and skippers are required to abide by strict rules and regulations. The use of nets (unless under licence) and lights are prohibited. Vertical jigging is not permitted anywhere in the Park. Spear fishing is permissible to a licence holder on the coast except in the Marine Protected Areas. 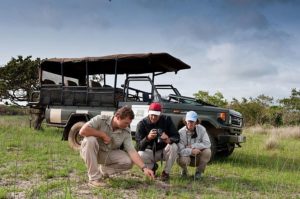 Licenced operators offer guided tours across all sections of the Park. See the Big 5 and much more.

A number of excellent game viewing roads traverse the Eastern and Western Shores sections of the Park. You are almost guaranteed to see hippo on the Pan Loop and the Vlei Loop has very rewarding game sightings – sometimes even a hippo out of the water in the middle of the day! For birders, the Catalina Bay Lookout point is particularly rewarding and the Mission Rocks Lookout provides a unique view of both Lake St Lucia and the Indian Ocean. The coastal Dune Loop provides sweeping vistas and the Grassland Loop skirts the southern shore of Lake Bhangazi before crossing over rolling grasslands and a small section of swamp forest along the Nkazana Stream. A new Forest Loop will open in 2016.

Licensed Operators offer guided tours of these sections including full day beach and bush experiences to Cape Vidal as well as night drives providing the opportunity to see the endemic Setaro Dwarf chameleon and the frequently spotted nocturnal leopard and hyaena.

Explore the Park’s splendour at your own pace under the guidance of an experienced ranger.

Taking a walk along one of iSimangaliso’s many designated walking trails is the best way to see the magnificent game animals that call the Park home. The absence of a noisy 4×4 safari vehicle ensures that the animals won’t be disturbed – and being accompanied by one of our highly trained armed guides ensures peace-of-mind, just in case you should happen to encounter any of the park’s predatory inhabitants.

Take a tour of iSimangaliso’s unspoiled beaches or explore its game reserves on horseback.

The Eastern Shores offers a fantastic equestrian experience. Horses are especially chosen to suit the terrain and will be carefully matched to each rider so that whatever your experience, you can enjoy the adventure.

Full and half-day itineraries on the waters of Lake Sibaya and Lake St Lucia are on offer to suit any adventurer.

Numerous options within the St Lucia area are offered by St Lucia Kayak Safaris. Their full day trip itinerary includes a kayak paddle, snorkelling at Cape Vidal and game drive on the Eastern Shores of Lake St Lucia. Also on offer is a half day kayak, or a sunset paddle on the Lake St Lucia estuary.

Lake Sibaya is the largest freshwater lake in South Africa and is completely landlocked – separated from the sea by a narrow ridge of forested dunes. The clear, blue lake with a bed of white sea sand is fed from rainwater, an underground stream and seepage. The 7,700ha lake has an average depth of 13m. Of the 18 species of fish that occur in the lake, 5 are believed to have marine origins. Canoeing trips can be arranged for residents of the Thonga Beach Lodge.

iSimangaliso’s coral reefs are sustained by the warm, nutrient-rich waters of the Agulhas Current – creating some of the world’s best diving spots.

The southernmost coral reefs of Africa can be found off Sodwana Bay. These reefs owe their existence to clear warm water carried southward by the subtropical Agulhas Current and the absence of silt-carrying rivers discharging into the region. They consist of thin veneers of Indo-Pacific corals colonising sandstone outcrops.

These waters are home to 95 identified species of hard and soft corals, sponges and many other invertebrates. There are over 1200 species of fish including ragged tooth sharks, whale sharks tiger sharks, manta rays and giant morays. Resident reef fish include tiger rock cods, rubber lips and huge potato bass.

The most commonly dived reefs at Sodwana are 2 Mile, 5 Mile, 7 Mile and 9 Mile Reefs. Each of these has unique features. There is also excellent diving at Rocktail Bay and Mabibi. Diving is possible all year round.

The best snorkelling spots throughout the iSimangaliso coastline are at the Kosi mouth, Rocktail Bay and Mabibi, Sodwana and Cape Vidal. 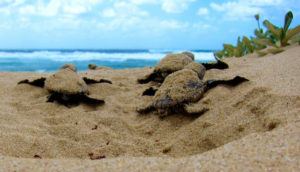 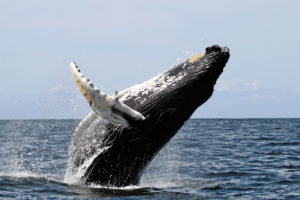 Sightings of whales are common off the coast of iSimangaliso.

The majority of sightings of whale in KwaZulu-Natal are South Hemisphere Humpback whales (Megaptera novaeangliae), which tend to be more spectacular and lively with their regular breaching than the Southern Right whales.

These whales pass along the KZN coast annually on a migration route between their summer polar feeding grounds in the Antarctic to the tropical and sub-tropical coastal waters of Northern Mozambique and Madagascar where they breed in the winter. The coastal waters off South America, Australia, New Zealand and the islands of the south-western Pacific Ocean are other breeding grounds for these marine mammals.